This week, at Autodesk University 2012, Autodesk unveiled Fusion 360, a new cloud-based mechanical CAD solution. What they didn’t do, however, was tell everyone the real significance of Fusion 360. They actually intentionally underplayed it.

Here is the real story: Fusion 360 is a major generational change in CAD. It represents Autodesk’s best thinking on what the future of CAD is going to look like. And it’s a future you’re likely to find mighty interesting. 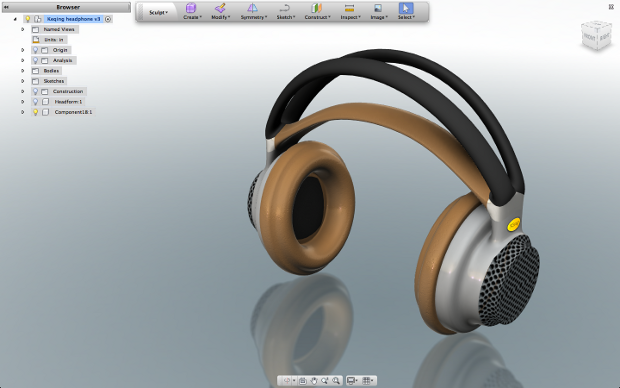 You might wonder, though: Hasn’t Fusion been out for several years, as a technology preview? Yes, indeed: When it first came out in 2009, Fusion was called “Inventor Fusion.” It was seen, by most, as a technology experiment in direct modeling CAD. A response to the challenges offered by Siemens PLM’s Synchronous Technology, and SpaceClaim’s eponymous direct modeling CAD system.

Direct modeling, a method that allows users to push and pull on CAD models, with the system figuring out the technical details necessary to make sensible edits based on those actions, was (and is) a major threat for traditional feature-based parametric CAD systems. It introduced a level of flexibility and intuitiveness in use that is hard to match. Yet, it’s not a panacea: There are many modeling tasks, especially families of parts, for which the feature-based parametric approach is better.

Inventor Fusion was actually a very capable direct modeling CAD system. What was surprising was that Autodesk seemed to be in no hurry to commercialize it. They made it available through Autodesk Labs, with no hint at trying to get people to pay money for it.

Now, with the announcement of Fusion 360, it all makes sense: Instead of integrating Fusion into Inventor, Autodesk has used it as the basis of a brand new cloud-based CAD application.

My initial guess, when I first saw Fusion 360, was that Autodesk had just taken the existing Inventor Fusion technology preview and added some cloud-based storage and dashboard features to it. I was wrong. The Fusion development team went much further than that.

The Fusion 360 client is a functional CAD system at heart, but quite a bit of the overhead functionality you’d expect in a CAD system has been pulled out, and moved to the cloud. For example, all of the importers and exporters for various file formats now reside on the cloud. So do file management services, rendering services and quite a bit more.

The Fusion 360 client is based on Webkit (the open source web browser engine), and uses HTML5 and WebGL for UI and graphics. It includes a somewhat thinned down version of the Autodesk Shape Manager (ASM) geometric modeling engine and an internally developed constraint solver, and does most CAD operations locally, to keep interactive performance up.

Provided you have a good internet connection, and you’re working on reasonable size models (up to a few hundred parts), using Fusion 360 probably won’t feel a lot different than using a local desktop CAD application.

One of the most important things to recognize about Fusion 360 is that it is not Inventor. Though it may share some concepts and component technologies with Inventor, it is a new CAD system, with a new software architecture, enabling capabilities that would be exceptionally difficult (and possibly even impossible) to implement in Inventor.

In the next part of this article, I’ll talk about some of those capabilities, tell you what I learned by talking to some of the folks involved in the creation of Fusion 360, and let you in on some of the secrets I discovered by reading between the lines, and asking careful questions.